The 501st Legion was a legion in the Galactic Republic, and later the Galactic Empire, whose evolution is focused on in a series of journal entries in the campaign of Pandemic's Star Wars: Battlefront II. The legion was comprised of elite Clone Troopers commissioned by Chancellor Palpatine during the Clone Wars. During the Galactic Civil War, the 501st served under Darth Vader and became one of the most well-known and most feared legions, earning the nickname Vader's Fist. Eventually, just like the rest of the Imperial Navy, the original Clone Troopers who comprised the 501st would begin to be phased out by Imperial recruits.

Stormtroopers are entirely loyal to the emperor without fault. Not even hesitating an order issued by the Emperor himself, even if it means losing their own lives. They are armed with standard E-11 blaster rifles. 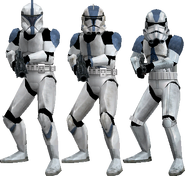 501st along with Galen Marek in the Dark Times II mod.

501 clone stormtroopers
Add a photo to this gallery
Retrieved from "https://battlefront.fandom.com/wiki/501st_Legion/Original?oldid=86541"
Community content is available under CC-BY-SA unless otherwise noted.