Blaster Cannon
The 74-Z Speeder Bike is a ground vehicle in DICE's Star Wars Battlefront. It does not require a Power Up to be piloted and can instead be found on large-scale maps set on the planet Endor.

The 74-Z is capable of traveling at very high speeds and requires fast reflexes to properly handle. Speeder Bikes are equipped with a single, front-mounted blaster cannon. The Speeder Bike also has a speed boost ability which doubles the speeder’s speed. Driving over infantry instantly kills them.

The 74-Z has a very murky brown color, that can make it hard to see when it is parked on the heavily forested planet of Endor.

Players can pilot these vehicles on Endor in the Supremacy, Walker Assault, and Turning Point modes, but it takes some skill to pilot the speeder and spatial awareness to not crash into the terrain.

The Speeder Bike and the Cloud Car are the only two ground vehicles that both factions can use, and are limited to one planet.

This vehicle is the primary vehicle in one of the training Missions. Completing the mission without taking any damage will unlock the "No Safety for a Joyride!" achievement/trophy.

"The 74-Z Speeder bike was a mainstay of Imperial forces during the Galactic Civil War. All speeder bikes are capable of high-speed travel and require skill and fast reflexes."
— In-game description

The 74-Z Speeder Bike returns in DICE's Star Wars Battlefront II and handles similarly to the previous game. It is only available on Endor.

It can still be used to run over enemies troops, and running into an enemy Hero/Villain will deal a high amount of damage to them. It is also less likely to explode when crashing into the environment. 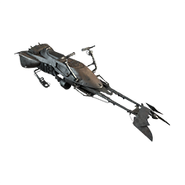