The 74-Z Speeder Bike is the Scout Vehicle used by the Galactic Empire, Galactic Republic, and the Rebel Alliance. It has a Blaster Cannon as a primary weapon, but has no secondary weapon. It handles in the same way as the BARC Speeder or the STAP, but is noticeably faster with a more powerful, slower firing gun. The 74-Z Speeder is not called this in the game itself. When the targeting reticule is placed over the speeder, it is simply called a "Speeder Bike". The 74-Z is replaced on Hoth by the Tauntaun, and on Naboo by the Kaadu. 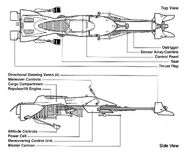 Speeder Bike Schematics.
Add a photo to this gallery

Retrieved from "https://battlefront.fandom.com/wiki/74-Z_Speeder_Bike/Original?oldid=98709"
Community content is available under CC-BY-SA unless otherwise noted.