The AAT, or Armored Assault Tank, is a ground Reinforcement vehicle in DICE's Star Wars Battlefront II. The AAT is the main tank for the Separatists and can be played in Galactic Assault and Supremacy.

"The AAT isn't a subtle instrument. Its powerful weapons wreak havoc on anyone foolish enough to stand in its way."
— Website description

The AAT is a relatively slow moving vehicle, but has high health and high damage to compensate. However, the AAT should not leave its rear exposed, as the rear is more susceptible to damage. The Siege Mode ability locks the AAT down in place, which allows the use of its heavy laser cannon to deal high damage to infantry and vehicles even at longer ranges. When engaging enemies at a closer range, the High Explosive Shells can be used to devastate targets caught in its blast radius, although the range of the shells are limited. The AAT is also effective at taking out air support with its Linked Fire, especially slow moving LAAT Gunships.

Non Ion-based blaster fire from troopers and Heroes have a damage multiplier of 0.3 to the AAT.

Ion-based explosives have a damage multiplier of 1.5 to the AAT.

In the PC version only, there's a bug that makes the Siege Cannon ability not work properly. You activate it and seemingly nothing happens. You can't fire with the main gun at all. The reason for this glitch is tied to the specific Key on your Keyboard that was chosen to activate the ability. Whenever the key '2' is mapped to the Siege Cannon ability, it won't ever work. Instead, map it to the default button and the bug is gone. You may try other keys too, but be sure to test them as there may be more keys that cause this issue.

In all version, there's another bug that makes the AAT fires both two turrets and the siege cannon, making it more hard to attack. This gives the AAT advantage, even against the opposing TX-130.

Promotional image of the AAT.

The AAT in Theed, on Naboo.

The AAT in Theed, on Naboo. 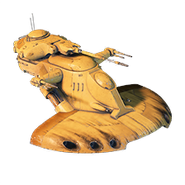 In-game icon for the AAT.