The AAT, or Armored Assault Tank is a vehicle used in Star Wars: Battlefront by the Trade Federation and by the CIS in the sequel game.

It is the counterpart to the Republic's IFT-X.

While both are equally matched, the IFT-X outmatches it in speed whereas the AAT has more firepower in the form of Laser Cannons, Concussion Missiles and a gunner-operated Particle Cannon.

The AAT is extremely deadly in the hands of a skilled crew and can yet perform some evasive manuvers against unguided shots, although this is harder when the missiles are locked on or manually guided towards it. It can also destroy lighter vehicles and turrets with ease. Although the AI, who use this vehicle will sometimes land a otherwise lethal shot.

It's vulnerable spot is the access door, located on the back. 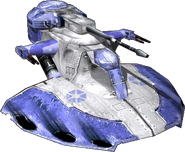 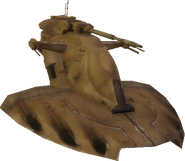 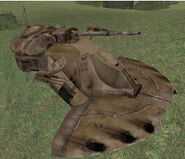 An AAT on Mygeeto.
Add a photo to this gallery

Retrieved from "https://battlefront.fandom.com/wiki/AAT/Original?oldid=91678"
Community content is available under CC-BY-SA unless otherwise noted.