"The mainstay starfighter of the Republic Navy, the ARC-170's bulk and range of armaments allow it to succeed in a variety of combat roles."
— In-game description

The ARC-170 Starfighter, also known as Aggressive ReConnaissance-170 Starfighter, is the Fighter for the Galactic Republic in DICE's Star Wars Battlefront II. It was a multipurpose starship designed for both intense battles and longer deep-space missions. It can be played in game modes set in Clone Wars-era space battles, such as Starfighter Assault on Ryloth, and on Kashyyyk: Kachirho Beach in Galactic Assault.

The ARC-170 is more than capable of fulfilling multiple roles, such as dogfighting with other starfighters, attacking objectives, and conducting ground attacks against infantry. The ARC-170 has much more health than other ships of the Fighter Class, including the ARC-170's counterpart, the Separatist Vulture Droid. Using the abilities Astromech Repair and Turret Gunner in combination allows the ARC-170 to shrug off hits and repel pursuers, along with attacking highly contested objectives with its Proton Torpedo and Laser Cannons.

The Astromech Repair ability regenerates any lost health to the ARC-170, and can be used in order to increase the survivability of the ship in cases of prolonged pursuits.

With the Turret Gunner ability, the ARC-170 can keep itself protected and dissuade pursuers by having the gunner automatically fire on enemies following the ship. The gunner is powerful enough to destroy enemy ships on its own if enemies do not break off their pursuit.

The Proton Torpedo can lock onto enemy starfighters and be used in a fire and forget manner, and can also be used to attack objectives or infantry. A well-placed torpedo can deal tremendous damage to any enemy, including Heroes and Armor. The Proton Torpedo can be dumbfired by double-tapping the ability, while tapping it once and keeping sight of a target allows it to lock on.

As seen on the cover of Star Wars Battlefront II 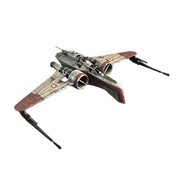 In-game icon for the ARC-170.
Community content is available under CC-BY-SA unless otherwise noted.
Advertisement