The ARC Caster is a weapon only available to the Galactic Empire, a descendant of the Republics DN Bolt Caster and concurrent with the Empires other Shotgun model, the E-11e Blast Cannon. This weapon shoots a stream of electricity at an enemy, causing a substantial amount of damage to the unit. It also has the ability to be charged up, so shots can become more powerful, and have the ability to 'ARC'; if you are facing a group of enemies, the electricity will jump from foe to foe helping you get a lot of kills. You have to find the right balance, as you won't always have to charge it up completely for a one-hit kill. However, this gun only has a few shots before it reloads so don't waste it.

All in all, this weapon operates differently from any other, and you will probably find it is very effective when used in conjunction with the Jumpack. This weapon can be very powerful but has a low rate of fire. 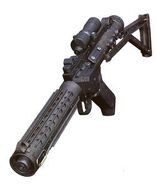 An E-11e with the stock extended.
Add a photo to this gallery
Retrieved from "https://battlefront.fandom.com/wiki/ARC_Caster?oldid=98347"
Community content is available under CC-BY-SA unless otherwise noted.