The ARC Trooper, also known as the Advanced Recon Commando, is the Infiltrator Reinforcement unit for the Galactic Republic in DICE's Star Wars Battlefront II. It arrived on March 26, 2019 as part of the Capital Supremacy Update.[1]

ARC Troopers are attackers that use unconventional tactics in their rushes and flanks. They dual wield DC-17 pistols, which can reconfigure into a slow but accurate mode or a fast but inaccurate one. While their default attacks are more deadly up close, ARC Troopers can charge up their DC-17 blaster pistols with their Power Blast ability, dealing damage to enemy players at a distance, as well as vehicles and villains. (As of The Age of Rebellion Update their Power Blast has been moved to a secondary fire, in-line with the ISB Agent; pressing the fire button now fires both blasters, in comparison to both buttons used.)

ARC troopers can reconfigure their weapon to fire at a faster rate, but with lower accuracy, making them more dangerous at close range.

ARC Troopers can become more knowledgeable of the battlefront by using their middle ability, Helmet Scanner, which lowers their rangefinder and scans for nearby enemies in pulses, revealing their positions to ARC Troopers.

ARC Troopers finally come equipped with a Shock Trap, a device thrown down by ARC troopers that, when detonated, charges an electric current that knocks down enemy players within its vicinity, opening them up for further attacks.[1] 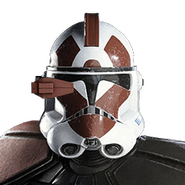 In-game icon for the ARC Trooper. 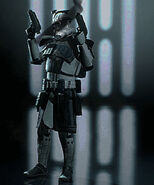 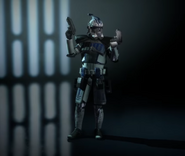 The Arc Trooper on the Stalker Card

The ARC Trooper on the Desperation Card