The AT-AT is a vehicle armed with two light blaster cannons, mounted on both sides of its head, and two heavy laser cannons mounted below the head. To the distress of the Rebel soldiers upon which this machine is unleashed, the AT-AT is also equipped with a shield that makes it nearly invulnerable to small arms fire. The AT-AT's four, towering legs allow its pilots a wide view of the battlefield but can be exploited to trip the walker and destroy it using the T-47 Airspeeder's tow cable.

In order to weaken the AT-AT for the attack, Rebel soldiers need to call in Y-Wing bombing runs. Once the Y-Wings weaken it, Rebel soldiers can begin to damage the AT-AT's armor, dealing extra damage if they target its drive motors located in its underbelly. The health of the AT-AT differs from map to map.

Collecting an AT-AT power-up in Walker Assault allows a player to man the AT-AT's weapons for 60 seconds. This differs from the titles in Pandemic Studios' Battlefront series, which granted the player full control over the behemoth. When a player is not in control, the weapons are controlled by an AI. Players can increase the length of time in the walker by killing enemies, with each kill giving an extra 3 seconds of time.

The AT-AT has three abilities at players' disposal. Attaining kills increases the time a player has control of the AT-AT's weapons.

Light Blasters: This is the ability the player always starts off with when assuming control over the walker's weapons. It is fired from the sides of the walker's head. The light blasters fire two shots of dual blasts that have a wide area of effect that will hurt enemy players upon impact. It is the fastest of the AT-AT's weapons, only needing a split second to cool down.

Heavy Laser Cannon: This second pair of blasters is fired from the bottom of the head. These lasers are more effective on vehicles and turrets as they deal more damage per shot. This is the only ability that the AI AT-AT uses. This ability is somewhat unwieldy and the camera angle is closer to the ground, making it harder for players to use on fast-moving targets such as Rebel soldiers. This ability is useful against players hiding behind cover as the explosion radius is much larger than the light blasters. This is the AT-AT's second-fastest ability, requiring a two-second cooldown.

Orbital Strike: The final weapon of the AT-AT. With this ability, the player can select an area for an Orbital Strike to occur. Note that this Orbital Strike, like its power-up version, doesn't damage or destroy buildings, obstacles, or wreckage, meaning the player must choose the area they want to bomb carefully. However, it will destroy unused or enemy turrets, and speeder bikes (on Endor). The AT-AT Orbital Strike differs from the power up version as the area that is bombarded is much larger, but the time bombarding is shorter. This often leaves enemies at the edge of the orbital strike on low health as not enough damage is dealt to fully kill them. The ability can be difficult to use when on Endor, as multiple trees will block the player's view. Out of all the AT-AT's abilities, this takes the longest to recharge, requiring a twenty-second cooldown.

Note: In-game walker health will appear as a percentage of total health.

Players are recommended to use the AT-AT's Orbital Strike ability on uplink stations, as it allows nearby friendlies to use the Orbital Strike as cover and deactivate the uplink. Rebel soldiers are also more likely to be grouping up there, increasing the likelihood of kills.

The AT-AT walker returns in DICE's Star Wars Battlefront II as a ground vehicle for the Galactic Empire. It is equipped with its light blaster cannons mounted on the sides of its head and its two heavy laser cannons mounted beneath the head. Like most other Artillery vehicles, its movement cannot be controlled by the player, but it can be piloted for 400 Battle Points, allowing the player to use its weaponry.

The AT-AT is featured as an objective for the Galactic Empire in Galactic Assault on Hoth: Outpost Delta, where the Empire escorts two AT-AT walkers to a Rebel base in the first phase, protecting them against missile launchers used by the Rebel troops that damage their armor and make them vulnerable to blasters. A stolen AT-AT is also featured as an objective for the Rebel Alliance on Endor: Research Station 9, where the Rebels steal an AT-AT walker in the first phase and escort it to an Imperial base in the second phase. 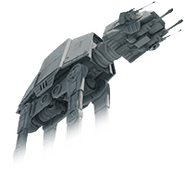 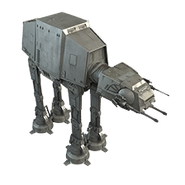 In-game icon for the AT-AT in Star Wars Battlefront II.
Add a photo to this gallery
Retrieved from "https://battlefront.fandom.com/wiki/AT-AT?oldid=83962"
Community content is available under CC-BY-SA unless otherwise noted.