The All Terrain Armored Transport or AT-AT is a command walker available to the Galactic Empire present in all iterations of the Battlefront series.

A hard to maneuver heavy walking behemoth, the All Terrain Armoured Transport, or AT-AT, is only available for use in the Galactic Empire. Its heavy laser cannons are capable of destroying most infantry and turrets in one shot. The AT-AT is capable of taking down virtually every threat put up against it, even turrets with just three hits.

The only thing on the map that poses a direct threat to the AT-AT is the Rebel Snowspeeder or a Heavy Trooper. However, even the Snowspeeder can be disregarded if a proper pilot is at the controls of the AT-AT. The AT-AT is one of, if not, the toughest vehicle in the entire game. Its armor is incredibly durable, and its elevation from the battlefield provides a unique vantage point for the unparalleled carnage. On top of that, it is immune to slicing with the Engineer's Fusion Cutter.

And the back fuel tank 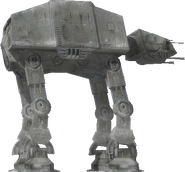 A side view of an AT-AT. 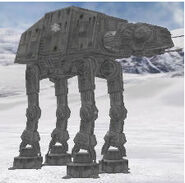 Firing missiles at the AT-AT's weakspot, the neck.

Retrieved from "https://battlefront.fandom.com/wiki/AT-AT/Original?oldid=101236"
Community content is available under CC-BY-SA unless otherwise noted.