The AT-RT Walker, better known as the All Terrain Recon Transport, is a Republic vehicle that appears in Star Wars: Battlefront II and can be operated by NPCs and the player alike. It is found on most maps in the game, specifically maps exclusive to the Clone Wars era including Utapau: Sinkhole, Mygeeto: War-Torn City, and Naboo: Theed.

The AT-RT is a fast and manuverable walker. Marching alongside infantry, they're most designed for an 'IFV' (Infantry Fighting Vehicle) role, such as providing covering fire or defending a strategic chokepoint. They use their laser cannons and mortars to flush out entrenched enemies from afar.

While this firepower and speed makes for a rapid assault vehicle, the armor is flimsy and won't take much punishment from anti-tank weapons, especially against heavy armor, which is usually the AAT, which should be allocated to the IFT-X. The driver is also exposed and can be killed without damaging the vehicle, allowing for a hostile takeover. 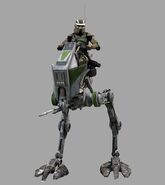 An AT-RT and pilot.
Add a photo to this gallery

Retrieved from "https://battlefront.fandom.com/wiki/AT-RT/Original?oldid=100001"
Community content is available under CC-BY-SA unless otherwise noted.