The All Terrain Scout Transport (AT-ST) is an Imperial ground vehicle that can be piloted in DICE's Star Wars Battlefront and Star Wars Battlefront II and is currently the only vehicle that is playable in all of the large game modes that are set on the ground, and is currently one of the only three ground vehicles in the game. It is playable in Walker Assault, Supremacy, and Turning Point.

The AT-ST functions as a ground vehicle for the Empire. The lightly armored two-legged ground vehicle can be controlled by players when locating an AT-ST Power up in the battlefield.

The AT-ST functions as an anti-infantry/vehicle Power Up for the Galactic Empire, armed with twin blaster cannons, a Concussion Grenade Launcher and a Homing Missile for anti-air. These weapons can prove effective in the right hands and can tip the favor of the battle for the imperial side.

The AT-ST possesses three weapons to use:

Blaster Cannon: The blaster cannon is fully automatic and has unlimited range and generally fires relatively quick succession, it requires some leading when firing at enemies at long range. Effective against infantry and turrets even at long range, its blast damage can also kill enemy players behind cover. It can also be used against fighters at low speed such as T-47 Airspeeders or slowed down X-Wings and A-Wings.

Concussion Grenades: Concussion grenades function similar to Barrage grenades, the player fires off multiple impact grenades in rapid succession, it will fire in a relative arc and detonate when it hits a surface. Infantry will die from a direct hit and surrounding infantry will receive considerable splash damage. These can also be used to destroy turret batteries.

Homing Missile: The homing missile functions as an anti-air missile. It can be fired without lock on and will track the starfighter it was fired closest to. This can be useful for trying to establish air dominance or assist friendly TIE Fighters/Interceptors in killing enemy units. It will also lock on to turrets and droids and can kill infantry soldiers. However, the missile does not lock on to infantry. Like all homing lock on missiles the enemy will get a warning of an incoming missile and evasive maneuvers and moving behind cover and such will defeat the missile, so careful timing needs to be planned.

The AT-ST returns in DICE's Star Wars Battlefront II as a vehicle for the Galactic Empire and Resistance (as Scavenged AT-ST on Ajan Kloss: The Klosslands). It is also spawned via Battle Points rather than vehicle tokens.

It handles similarly to its previous iteration, but with a change to some characteristics. The AT-ST in this version deals slightly less damage than its predecessor, however it can now self repair like most other vehicles in Battlefront II.

Non Ion-based blaster fire from troopers and Heroes have a damage multiplier of 0.3 to the AT-ST.

Ion-based explosives have a damage multiplier of 2 to the AT-ST. 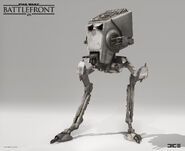 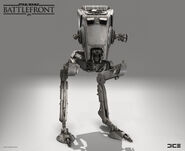 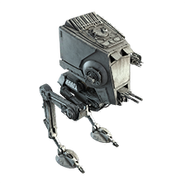 In-game icon for the AT-ST in Star Wars Battlefront II.

The Scavanged AT-ST, which is available for the Resistance on Ajan Kloss.