The infamous AT-ST, or All Terrain Scout Transport, is the Galactic Empire's main armored unit. It has seen a proud service across many planetary battles.

It has proven itself to be an agile response to rebel attacks and its symbolic stature has been at the front of psychological tool, striking fear into many rebels' hearts during their march in the name of the Emperor.

The AT-ST towers over the battlefield, offering the pilot a good view of the action. Operating similarly to that of the AT-RT, the ST features better armor and the driver safe from harm within its armored cabin.

Skilled drivers can use their firepower to solidify a firm assault and avoid potential anti-tank fire as the towering stature would allow anti-tank units to be picked off from a distance. Another feature is the guided rocket, available for the gunner, which can be used to supplement the driver's efforts against enemy armor.

While the AT-ST enjoys better armor, the articulation platform can be hit as a vulnerable area.

An AT-ST on Hoth. 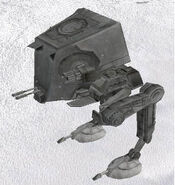 Another view of the AT-ST.

A Rebel Vanguard fires rockets at an AT-ST on Tatooine.

An AT-ST meets it's end on Endor.

An AT-ST.
Add a photo to this gallery

Retrieved from "https://battlefront.fandom.com/wiki/AT-ST/Original?oldid=93501"
Community content is available under CC-BY-SA unless otherwise noted.