AT-TEs are major additions to any battle, with massive firepower and health, due to it being a Command Vehicle. Its Pilot has two Laser Cannons, and two particle Rockets. The Main Gunner was situated on an all-round turret on top of the AT-TE, and fired a single particle rocket. The Co-Pilot, positioned on the rear of the AT-TE, fires rapid-fire particle beams, which is more effective at destroying units than Ground vehicles.

The cylinder along the bottom. 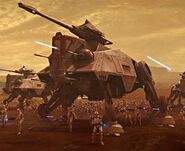 A AT-TE Walker in action on Geonosis.