Star Wars Battlefront II
Ajan Kloss is a jungle moon featured in DICE's Star Wars Battlefront II. A map set on Ajan Kloss, The Klosslands, arrived as part of The Rise of Skywalker Update, and released on December 20, 2019.[1] A dense, remote jungle moon, Ajan Kloss was once scouted as a potential base for the Rebel Alliance, and eventually became home to the third Resistance base as they hid out from the First Order.

The following is a list of maps that are set on Ajan Kloss and the modes that they can be played in: 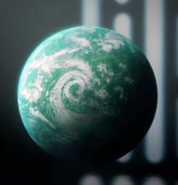