Anakin Skywalker is a major character in the Star Wars saga, serving as one of the protagonists of the prequel trilogy and one of the main antagonists of the original trilogy. Originally a slave boy from Tatooine, he was believed to be the Chosen One, destined to bring balance to the Force, and was recruited into the Jedi Order, training under Obi-Wan Kenobi. He became a Jedi Knight and fought in the Clone Wars, but later became the Sith Lord Darth Vader after helping kill Mace Windu, believing that the Dark Side would give him the means to save his wife Padmé Amidala, whom he saw in a vision dying in childbirth. Now Emperor Palpatine's apprentice, he was tasked with helping establish the Galactic Empire by killing all the Jedi at the Temple on Coruscant, and then by killing the remaining Separatist leaders on Mustafar. He later has a confrontation with Padmé on Mustafar and, in anger, Force choked her, believing that she had brought Obi-Wan there to kill him, although, in reality, he had sneaked aboard her her spacecraft. After a duel with Obi-Wan, Anakin lost all his limbs and was severly burned by lava, but survived his injuries and was brought by Palpatine to an Imperial Medical Centre, where he was put in a black suit to help him survive, thus turning him into a horrible and feared monster; his rage was only furthered after Palpatine informed him of Padmé's death shortly after his duel with Obi-Wan, although Padmé still managed to give birth to twins, of whom Vader wouldn't learn until many years later. Darth Vader ruled the galaxy alongside his master, until being redeemed by his son and giving his own life to save him and kill Palpatine, thus fulfilling the prophecy of the Chosen One. Anakin is the father of Luke Skywalker and Leia Organa, father-in-law of Han Solo, and grandfather of Kylo Ren.

Anakin Skywalker is a fast-paced fighter, and wields a blue-bladed lightsaber. His attacks consist of rapid strikes. Anakin Skywalker is capable of jumping four times consecutively, enabling him to reach high altitudes fast. When jumping, Anakin is able to attack with a single swipe. When sprinting, Anakin can attack with a decently accurate flurry of attacks, which stops his momentum.

Unlike all other Heroes (other than Luke Skywalker) Anakin has a separate skin in the Coruscant - Operation: Knightfall level. The skin adds a cape and a hood, similar to his appearance as a Sith in the end of Revenge of the Sith. Curiously, the lower half of his tunic and surcoat are missing in this skin, leaving his light brown leggings exposed. 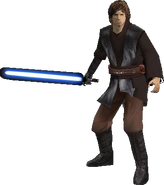 The uncloaked variant, on all maps except Coruscant - Operation: Knightfall. 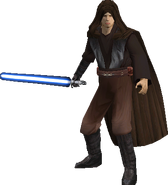 The hooded variant, on Coruscant - Operation: Knightfall
Add a photo to this gallery 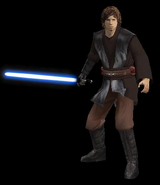 The Duel on Mustafar.
Add a photo to this gallery

Retrieved from "https://battlefront.fandom.com/wiki/Anakin_Skywalker/Original?oldid=95039"
Community content is available under CC-BY-SA unless otherwise noted.