Anakin Skywalker is a Galactic Republic Hero in DICE's Star Wars Battlefront II.[1] He arrived on February 27, 2019, as part of The Chosen One Update.[2][3]

As the Chosen One, Anakin Skywalker is a powerhouse. A largely offensive hero, Anakin channels his emotions and inner conflict into his Force powers and abilities, and despite still being on the light side, Anakin can momentarily tap into the dark side with his unique ability Retribution.

Anakin brings enemies to him with his Pull Dominance, where enemies fall at his feet and take damage, allowing Anakin to finish them off with his melee attacks.

Anakin unleashes a massive burst of power all around him in a circular radius with his Heroic Might ability. Anakin can increase the range of Heroic Might with the more enemy players damage him (though Anakin also takes less damage while charging up Heroic Might), allowing Anakin to maximize its range affect more enemies.

Finally, Anakin taps slightly into the dark side with his unique, fourth ability: Retribution. When he and nearby allies take damage, Anakin's Retribution charges up. When Retribution is used, Anakin uses the Force to grasp and choke all enemies around him, dealing a high amount of damage to those caught in his punishing grip.

Heroic Might will always fail to hit enemies in range if Anakin uses it while his back is touching a wall, and there's a low ceiling above him. If you think you might be in such a spot, the easiest way to guarantee you'll hit enemies, is to quickly turn to face the wall instead, and then release Heroic Might as that makes it work. This is not the only case where Heroic Might fails, but it's the only one known to be 100% reproducible.

Also Heroic Might can be interrupted upon activation leading Anakin into a bad state where he can't sprint, jump, attack, or use abilities at all, leaving him defenseless. This effect persists for a short while, and after that he's back to normal and Heroic Might is refunded so it can be used immediately. If you die or respawn during this effect, when respawning Anakin will be back to normal.

Another one for Heroic Might, if you tap its button too quickly, Heroic Might might enter charge mode even if you aren't holding the button. If you tap the button again it'll release Heroic Might, so this issue isn't so bad (the same happens to Obi-Wan's All-Out Push).

Retribution can be interrupted upon activation leading Anakin into an even worse bad state where he stops being able to do almost anything. This is more notorious because it won't fix itself until you use Retribution again, which can take a really long while. Reports indicate sometimes not even that can fix the issue. Dying and Respawning fix this issue though.

Retribution and Heroic Might grant Anakin 90% Damage Reduction and immunity to forced movement effects, paralyzation and being knocked down. However, since 2019, these perks don't last as long as the abilities themselves, and they also have a small delayed start. This means that if enemies hit Anakin just as he activates the abilities, or in the final moments of the abilities' durations, they can take advantage to deal full damage to him, knock him down, push or pull him, immobilize him and even cancel the usage of the abilities altogether.

Pull Dominance, Retribution and Heroic Might, as many other abilities from other heroes, can fail to apply their movement/immobilization effects while still dealing damage, or fail to damage enemies while still applying the movement/immobilization effects, or even fail to both damage and apply effects to enemies in range. Besides the first issue mentioned in this list, no other specific situation is known to produce these undesired effects, so for now it's still a mystery and can be labeled as a random bug.

"This is where the fun begins."
— First emote

"You call this a diplomatic solution?"
— Second emote

"A very wise Jedi once said, 'Nothing happens by accident.'"
— Fourth emote

"I don't like sand. It's coarse and rough and irritating...and it gets everywhere."
— Upon spawning on a desert planet

"I ignored ONE transmission from Master Windu... This is SO unfair!"
— Upon spawning

"I should've told R2 to keep the ship running!"
— Upon Spawning

"Not so smart, are you?"
— Using Pull Dominance

"I would like to have a word."
— Using Pull Dominance

"One lightsaber and they all start to scatter?"
— Outnumbering a group of enemies

"We've got superior forces and a Jedi. What do you have?"
— Outnumbering a group of enemies

"Time to mop the floor with these sleemos!"
— Spotting enemies. Notice that Anakin speaks some Huttese

"Anakin: My powers have doubled since the last time we met, Count!
Dooku: Good! Twice the pride, double the fall."
— Banter with Count Dooku

"Anakin: Finally decided to crawl out from whichever bounty hunter you were hiding behind?
Dooku: Pawns in a game you have yet to start playing."
— Banter with Count Dooku

"You're gonna pay for all the Jedi you killed, Dooku!"
— Banter withn Count Dooku

"Hello, General. I've heard you're looking for a Jedi."
— Banter with General Grievous

"There's something...wrong about you. I...I know you somehow."
— Banter with Darth Vader

"I will not give in to you! Ever!"
— Banter with Darth Vader

"This is some...Sith trick! It has to be!"
— Banter with Darth Vader

"Obi-Wan: Anakin, what are you doing here? You were supposed to report back to Coruscant!
Anakin: I know you said not to wander off, but think of it more as a... reconnaissance. I'm back on Coruscant in spirit!
Obi-Wan: [sigh] Why do I even try?"
— Banter with Obi-Wan Kenobi

"Anakin: I've got a very bad feeling about this...
Obi-Wan: Yes, you and everyone else."
— Banter with Obi-Wan Kenobi

" Anakin: Feel like chipping in at all, master?
Obi-Wan: Oh, no. Far be it for me to step between you and the endless rain of blaster-fire that follows you around."
— Banter with Obi-Wan Kenobi

"Ha ha... you're no Sith. You barely know how to hold a lightsaber!"
— Banter with Kylo Ren

"Chosen One: countless victims."
— Heroes vs. Villains announcer, when an Anakin player gets a 5-player killstreak

"Destiny proves no match for the villains daring to challenge the legendary Anakin Skywalker."
— Heroes vs. Villains anouncer, when an Anakin player gets the final game-winning kill

"Jedi Skywalker has joined us!"
— Republic announcer, when an Anakin player spawns

"Skywalker has joined us!"
— Republic announcer

"The clones are hoping Anakin Skywalker will help them."
— Separatist announcer, when an opposing Anakin player

"The Republic forces have called in Anakin Skywalker."
— Separatist announcer, when an opposing Anakin player spawns

A promotional image of Anakin Skywalker on Geonosis. 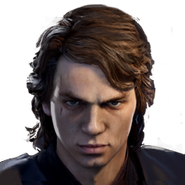 Retrieved from "https://battlefront.fandom.com/wiki/Anakin_Skywalker?oldid=98263"
Community content is available under CC-BY-SA unless otherwise noted.