Asajj Ventress is a Hero available to download in Star Wars Battlefront 2. In the game, her lightsabers are connected together by a fibercord at the hilt. She is also available in Star Wars: Battlefront Renegade Squadron as a normal hero. She is a very formidable opponent in battle, and is very skilled in the Force with a manifestation of hatred and bile. In SWBFII, she is only available through the Xbox Live patch.

Asajji Ventress is a young sith acolyte under Darth Tyrannus' (Count Dooku) training. She was only taught the bare fundamentals of the sith, before Count Dooku chose to get rid of her. 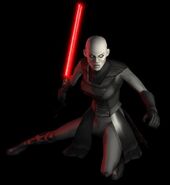