This page is about the game mode. For the class, see Assault.

In an assault battle, each team has an arsenal of starfighters at their disposal. This is basically a Conquest battle, except it is in space. There are two classes in this mode to choose from: Pilot and Marine. The Pilot is equipped with a pistol, a fusion cutter and time bombs. The Pilot is able to repair his ship with his or her fusion cutter, and if their ship takes damage in flight, it automatically repairs itself, albeit quite slowly. The Marine is equipped with a blaster rifle, a rocket launcher, and thermal detonators (or "grenades"). The Marine can also pilot ships, but if their ship is damaged on the ground or in space, they cannot repair it nor will it repair itself automatically. Each ship has its own unique abilities: bombs, seeker missiles, rapid-fire blasters, heavy carrying capacity, even speed. To win, you must reach a given amount of points, shown in the top-center of the screen. When a team reaches its point goal, it wins. An easier way to obtain points than killing enemy ships or blowing up their mother ship parts from the outside is to land in the enemy's hangar and go into their hull, using the pilot's time bombs to blow up their Auto-Defense Mainframe, Shield Generators, Engine Cooling Tanks, and Life Support Systems. This is very risky, however, as the enemy ship is usually filled with enemies. Very drawn out, this is a fun way to hone your pilot skills and strategic skills.

There is also a mode on Mos Eisley called "Assault", but it is quite a bit different. In this game mode, the player can play as heroes or villains in an all-out duel between the two factions. The factions include all heroes and villains in-game. Which ever team reaches a certain amount of points (each point is awarded per kill) wins; the usual number is 180, but the player may tweak it to their liking. All command points are uncapturable. 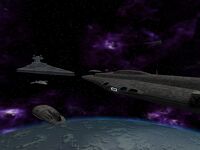 A match of Assault taking place on Space Hoth. 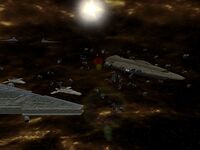 A beautiful space battle between an Imperial Star Destroyer (accompanied by it's frigates) and a Mon Calamari Cruiser.

A riveting space battle between the CIS and the Republic above Coruscant.
Add a photo to this gallery

Retrieved from "https://battlefront.fandom.com/wiki/Assault/Original?oldid=86615"
Community content is available under CC-BY-SA unless otherwise noted.