The Assault class is one of the four trooper classes in DICE's Star Wars Battlefront II.

Fast and extremely effective at short and medium range with 150 health points, this class can forcefully push themselves through enemy lines and clear a path for their allies. Like all units, the Assault's class level is determined by the experience earned and time played in game with the class. Star Cards for the Assault class can be unlocked through Skill Points, one of which is earned each time the class is levelled up. Their unique Ability Card is Assault Training, which gives health for each defeated enemy. The Assault class uses blaster rifles that are unlocked by completing their respective milestones.

One of the Assault's default abilities is Vanguard. When this ability is activated, the player will pull out a flechette-firing shotgun that fires a buckshot of high-damage shrapnel, making it very deadly at close range. The player will also gain an increase in movement speed.

The Vanguard flechette gun can two-shot kill most enemies at closer ranges and can even one-shot kill if an enemy is close enough. It can win most one on one fights if the user can land a successful hit, but missing shots is very punishing and can leave the player vulnerable until the next shot is loaded. Along with the standard Vanguard, it has three variants that can be equipped via Ability Card: Recharge Vanguard, Slug Vanguard, and Killstreak Vanguard.

The former in-game icon for the Assault class. 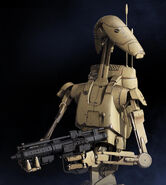 Promotional image of a B1 Battle Droid of the Assault class.
Community content is available under CC-BY-SA unless otherwise noted.
Advertisement