Athulla is a planet in the Jinata system, the same system as Vardos and Pillio, featured in the Resurrection campaign mode of DICE's Star Wars Battlefront II. It is the setting of the mission "Project: Resurrection".

As a planet in the Jinata system, Athulla falls under the full control of Jinata Security after the fall of the Galactic Empire. The First Order finances J-Sec's control of the Jinata system as J-Sec is part of a trafficking operation known as Project Resurrection—the kidnapping of families, whose children are sent to the First Order to be raised as First Order Stormtroopers. The Athullans are among the victims of this operation.

Shriv Suurgav finds the Corvus on Pillio stranded with Del Meeko nowhere to be found and reaches out to Iden Versio and her daughter with Del, Zay Versio. They travel to Athulla after learning Del visited the planet before the Corvus landed on Pillio, where they receive a holographic message from a local Athullan looking for Del. The Abednedo tells Iden, Zay, and Shriv that Jinata Security has been kidnapping their families. They are suddenly intercepted by a J-Sec fleet commanded by Leema Kai from his flagship, the Opportunity. Iden presents them an opportunity to surrender but Kai refuses. Iden eventually shoots Kai down in a dogfight and the remaining crew of the Opportunity surrenders when Zay threatens to fire on their frigate with missiles despite the Corvus not, in fact, having missiles. They then learn that Protectorate Gleb, the leader of Jinata Security, has established her base of operations on none other then Vardos itself, and jump to hyperspace en route to Vardos. 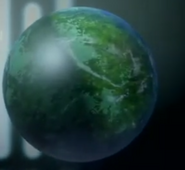