"As durable and destructive as the B2 Super Battle Droid, the RP version of this droid comes equipped with JETPACKS making them even more dangerous."
— In-game Description

The B2-RP Rocket Droid is the Aerial Reinforcement unit for the Separatists in DICE's Star Wars Battlefront II.

The B2-RP Rocket Droid is the Aerial Reinforcement unit for the Separatists. Its primary weapon is a Twin Wrist-Blaster and, like other Aerial units, it is equipped with a jetpack. This grants the B2-RP two of its three abilities: Jetpack Boost and Jetpack Dash. Instead of a Rocket Launcher as its middle ability, the B2-RP utilises a Wrist Rocket, similar to the standard B2 Super Battle Droid. The B2-RP Rocket Droid resembles the B2 Super Battle Droid Enforcer unit, with added white markings lining their body. Unlike the other Aerial units, its jetpack is built-into its back.

The B2-RP has the highest base health of any Aerial at three hundred points as opposed to the others' two hundred. This combined with the high damage from the Twin Wrist Blaster means that the B2-RP is capable of winning single engagements easily, and its high health means it can tank more damage than its fellow Aerials. The low venting cycle and low heat per shot means that the B2-RP can stay in the fight longer, and with its Wrist Rockets can be more than effective against other Reinforcements and Heroes.

While the Rocket Droid has a dependable weapon and high health, it suffers from having a shorter dash distance than other Aerials. This means that the Droid must depend on its Jetpack Dash and Jetpack Boost in order to build space between and enemy and it, or to close the distance with them. The Droid also presents itself as a large target to enemies due to its bulky upper body, meaning that it is quite easy to be hit by its foes or enemy Specialists. 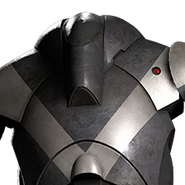 Front of the B2-RP in the Collection menu.

Back of the B2-RP in the Collection menu.

A B2-RP engaging a Jet Trooper.

A B2-RP in the canyons of Trippa Hive.

A B2-RP entering the battlefront on Geonosis.
Add a photo to this gallery
Retrieved from "https://battlefront.fandom.com/wiki/B2-RP_Rocket_Droid?oldid=78871"
Community content is available under CC-BY-SA unless otherwise noted.