"Distinguishing itself from other speeders of the era, the BARC's popularity extended beyond its role as a reconnaissance vehicle. In addition to seeing heavy combat during the Clone Wars, civilian models were adopted by law enforcement."
— In-game description

The BARC Speeder (Biker Advanced Recon Commando Speeder) is a Speeder vehicle for the Galactic Republic in DICE's Star Wars Battlefront II. It was released on November 28, 2018 along with the new Geonosis map in Galactic Assault.[1]

The BARC speeder is available for the Galactic Republic. It is only available on Geonosis, as well as on every Clone Wars-era Supremacy map, except Kamino. One of the speeder's main weaknesses is when you are trying to avoid grenades (e. g. Detonate Charge, Shock Grenade, etc.) or attacks by villains. This is because the BARC speeder is bad at moving backwards.

A behind-the-scenes developer sneak peek of the WIP BARC Speeder. 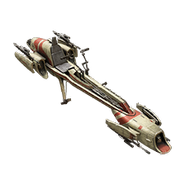 In-game icon for the BARC Speeder.