"A brave and resourceful astromech droid, BB-8 accompanied Poe Dameron on many dangerous missions for the Resistance. Despite his modest appearance, he saved his friends multiple times, giving the saying 'never underestimate a droid' its full meaning."
— In-game description

BB-8 is a Resistance droid hero in DICE's Star Wars Battlefront II. He was added as part of the BB Update alongside the First Order hero BB-9E.[1]

BB-8 is primarily an offensive hero. His Rolling Charge is similar to the Ovissian Gunner and Han Solo's charges, where BB-8 rushes forward and knocks back an opponent upon contact, dealing damage. It also deals damage through blocking opponents.

If he is in a sticky situation, BB-8 can use his Cable Spin ability to deal very high area damage. Cable Spin shines greatly in tight spaces with a group of enemies, especially when Spinner and Whirlwind Star Cards are equipped. As a trooper, you will have a hard time escaping his Cable Spin before you are defeated, but Heroes are able to escape it easier.

BB-8's passive ability Technical Support makes him count as two units, making him a vital unit in Supremacy, Co-Op and Instant Action. The ability also allows him to override objectives faster, and can be used in order to overcome an objective as quick as possible in intense zones. His second passive ability, Swift Reaction, increases the cooldown speed of nearby friendlies' abilities. When paired with Finn's Big Deal ability, surrounding allies will be greatly strengthened. BB-8 also has a flashlight that can be activated using the melee key.

"BB-8 is extremely agile on the battlefront. Use this edge to zip between multiple hot zones and help your allies."
— First hint
"BB-8 has several passive abilities. Position yourself on the battlefront to make the most of them."
— Second hint
"Enemies affected by BB-8's RESISTANCE BACKING will get misleading data on their radar."
— Third hint 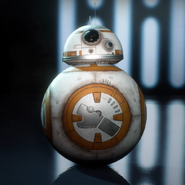 A promotional image of BB-8. 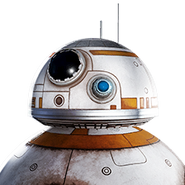