"A top-of-the-line astromech droid, BB-9E was assigned to the Supremacy - the flagship of Supreme Leader Snoke - to keep machinery, procedures, and potential intruders in check."
— In-game description

BB-9E is a First Order hero in DICE's Star Wars Battlefront II. He was added as part of the BB Update along with BB-8.

BB-9E is the first droid hero for the Dark Side and is a support unit with abilities that support other Dark Side heroes and troopers.

"Programmed to not buckle in a fight, BB units serving the First Order often finds themselves in the crossfire. BB-9E is such a battle-hardened veteran."
— Star Wars Battlefront II website

Similar to BB-8, BB-9E's main weapon is a shock prod that will damage enemies. Unlike BB-8's shock prod, however, BB-9E's will stun enemies while dealing lower damage to compensate.

BB-9E's passive ability Bacta Support heals friendly units around him by a small amount. This may be improved with the Potent Bacta Star Card. Also like BB-8, BB-9E has the passive ability Technical Support that allows him to count as two units when capturing Command Posts, useful in modes such as Supremacy, Co-Op, Instant Action, and certain phases of Galactic Assault.

BB-9E has three abilities. He can emit a smoke screen that obscures the immediate vicinity around him, while at the same time revealing the position of enemies in short pulses. His Shock Spin ability knocks back opponents right next to him and overheats the blasters from enemies farther away from him and disables incoming projectiles. While Shock Spin disrupts blasters, Charge Up does the opposite, as it grants unlimited cooling to nearby allies' blasters for a short period. It also decreases the cooldown time of friendly units' abilities.

BB-9E's main weapon, Shock Prod, has low damage output, making it best used on one-on-one engagements or on low-health targets. If with another ally, the stun will be most effective in keeping the enemy immobilized for long enough for the ally to get the kill.

BB-9E is primarily a support hero with abilities that reward friendly players who stick close to him. This is best seen with his Bacta Support passive ability and his Charge Up ability.

His Smokescreen ability is very useful in close-quarter areas. Lightsaber users in particular will have a hard time tracking BB-9E. However, there are certain ways to see through the smoke, like Lando Calrissian's blaster scope or if he is marked by a scan ability such as Rey's Insight.

BB-9E's Shock Spin ability is especially deadly if used on a ledge or abyss, as it can knock enemies off the map. Maps like Command Sector North or Cloning Facility are great places to use this ability.

Additionally, BB-9E has good synergy with the other First Order hero Captain Phasma. When BB-9E activates his Charge Up ability, which grants unlimited cooling for a short time, Phasma will be able to fire her blaster for a longer time, which also becomes more accurate the longer she fires. Phasma can help BB-9E as well by deploying her droid, which can defend BB-9E, and allow allies to stay around the droid and receive bacta from BB-9E.

"BB-9E is extremely agile on the battlefront. Use this edge to zip between multiple hot zones and help your allies."
— First hint
"BB-9E has several passive abilities. Position yourself on the battlefront to make the most of them."
— Second hint
"Enemies wielding lightsabers inside BB-9E's SMOKE SCREEN will have a hard time closing in on their targets."
— Third hint

A promotional image of BB-9E 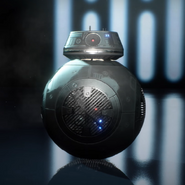 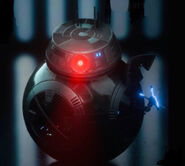 Release version of BB-9E in the menu 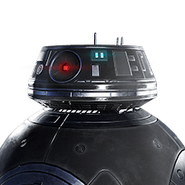