This Rebel alliance starcraft is used as a heavy bomber for planetary and orbital targets. In the Walker Assault mode, Y-wings are utilized to lower the protective shields of the AT-ATs. Although hard to hit, the Y-wings can be destroyed by starfighters or be locked onto with Smart Rockets or Ion Torpedoes. The Y-wings are collectively under the call sign Rogue Squadron. When one is called via uplink, the time they give to the Rebels to attack is decreased as shown when the color of the Y-Wing drains. Once all Y-wings time has run out, the Rebels must move onto the next uplink, or if it's the final move up, will suffer defeat.

Although they cannot be piloted, the Y-wing can be summoned in the form of a Power Up. When collected, a squad of AI controlled Y-wings will spawn near the player and attack enemy fighters for 60 seconds.

A Y-Wing in walker assault

"Repurposed by the Rebel Alliance, these older starfighters became the workhorse of the Fleet. Utilizing their Ion Cannons and Missile payloads to cripple larger ships of the Galactic Empire."
— In-game descriptionThe BTL-A4 Y-Wing returns in Star Wars Battlefront II, and is now playable. It serves as the Bomber for the Rebel Alliance and is available in Starfighter Assault and on certain maps in Galactic Assault and Supremacy.

"Tough shields, an arsenal of onboard weapon systems, and a helpful astromech droid for quick repairs make the longstanding Y-wing one of the most reliable starfighters."
— Website description

The BTL-A4 Y-Wing serves as the heavy hitter for its team, being able to deal heavy damage to objectives, enemy starfighters, or infantry on the ground if not taken care of. Despite it's firepower, it suffers from having decreased maneuverability compared to other ship classes.

The Astromech Repair ability regenerates any lost health to the Y-Wing, and can be used in order to increase the survivability of the ship in cases of prolonged pursuits.

With the Ion Cannon Turret ability, the Y-Wing activates its ion cannons in order to slow down any enemies it is targeting, along with disabling their abilities and dealing some damage to them. This ability can prove devastating to any ships hit by it as it will leave them almost completely vulnerable to the Y-Wings arsenal of weapons. 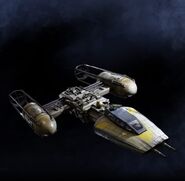 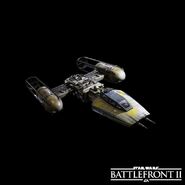 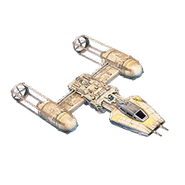 In-game icon for the Y-Wing in Star Wars Battlefront II. 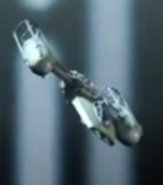