Bespin: Cloud City is the second Bespin map in Star Wars: Battlefront. The map is composed around a central courtyard, surrounded by tall skyscrapers that link up together with multiple bridges, leading to various command posts.  The map has a few nods to the Empire Strikes Back, locations such as the Carbonite Chamber that acts as a command post, and a massive chasm that bears a similar appearance to the one Luke falls into after dueling Darth Vader.

In the Historical campaign mode on Star Wars Battlefront I; your mission is to defeat the Imperial Garrison. It is useful to play as a Marksman as there are many hiding places for snipers. Take advantage of the scope on your rifle as it enables you to take out enemies in the far distance and on other balconies. 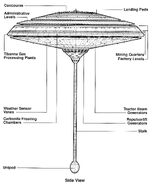 Game Play
Add a photo to this gallery

Retrieved from "https://battlefront.fandom.com/wiki/Bespin:_Cloud_City/Original?oldid=90657"
Community content is available under CC-BY-SA unless otherwise noted.