In Battlefront, Bespin was added as part of the Bespin Update and could be played by Bespin expansion pack owners. In Battlefront II, Bespin is visited in the campaign mission "Under Covered Skies" and can be in the multiplayer modes Blast and Heroes vs. Villains on the map Administrator's Palace.

Star Wars Battlefront: Bespin (the DLC that Bespin is featured in) was released on June 21, 2016 for Season Pass holders and July 5, 2016 for players who wish to purchase the DLC as an individual content pack.

When Walker Assault is played on maps that take place in Cloud City, the player count is dropped to 32 and there is only one walker, similar to what takes place on Endor. 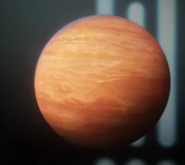 Retrieved from "https://battlefront.fandom.com/wiki/Bespin?oldid=98281"
Community content is available under CC-BY-SA unless otherwise noted.