Boba Fett is a highly versatile hero character equipped with a variety of powerful weapons. The use of his Jetpack gives him an element of verticality that can make him difficult to track. His primary weapon is the EE-3 Blaster Rifle.

Jetpack: Boba Fett's version of the Jetpack has its own way of functioning. Rather than boosting him a certain distance as the regular one would, it allows him to hover above ground. It can only be used for a certain amount of time before it needs to recharge.

"Draw their fire off me!"
— Upon taking damage or low health
"No disintegrations."
— Upon using the Flamethrower
"That was for Jango."
— Upon defeating Luke Skywalker 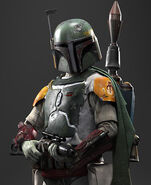 Boba Fett is the most mobile Dark Side hero in Battlefront II, capable of traversing the map quickly and reaching heights that no other character can. His jetpack allows for attacks at high speeds, but it burns fuel quickly, except when his ability For The Hunt is active, which temporarily grants him unlimited jetpack fuel. Despite the advantages granted by Boba's jetpack, it is also very susceptible to explosives, Force abilities, and explosive splash damage, knocking Boba out of flight and making him flail back down to the ground. However, the player can reactivate the jetpack in mid-air after a short delay.

Boba Fett's EE-3 blaster rifle weapon is effective at close-range to medium-range. Though it does not have a scope, his weapon's burst shots deal high damage, especially at close ranges, but is inaccurate at longer ranges.

"I know what you're planning."
— Upon using For the Hunt 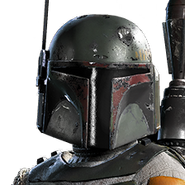 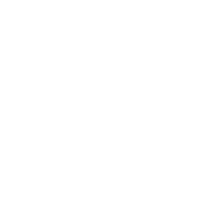