This special spacecraft can only be piloted in the Fighter Squadron mode and in Battle Station. The starcraft is equipped with Ion Cannons, Proton Torpedoes, and a Sensor Jammer that can be activated to fly undetected on the mini-map and to avoid missile locks.

The player can pilot this vehicle if they collected the hero pickup as an Imperial. Despite its powerful weaponry, it can suffer from trouble locking when moving the ship up and down.

If the player is the Slave I, and spots the Millennium Falcon, they can fire upon the ship. Crashing into the Falcon will defeat the enemy player, but will not count towards the "Don't Get Cocky" trophy/achievement.

It is one of the four hero ships present in the game.

Boba Fett's Slave I can be very cumbersome ship to handle. Its large vertical shape can lead to accidental collisions with objects, and the low laser cannon placement can make it difficult to land consistent hits on enemy star fighters. It is also a large target for enemy fighters as it sticks out compared to other villain ships. Nonetheless it can be capable of dealing massive damage, with the ability Seismic Charge being able to one hit most fighters, including the smaller hero ships. Its Ion Cannons can be used to boost the the damage that the Slave I can output, along with slowing the targets down so that they can be easier to hit. 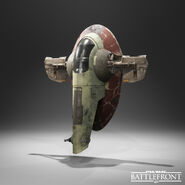 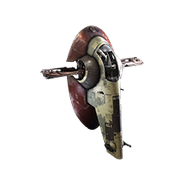 In-game icon for the Slave I in Star Wars Battlefront II.