Boba Fett is an infamous bounty hunter and a hero for the Galactic Empire. When Jango Fett accepted the offer to let the residents of Kamino clone him for their army, he asked for one of the clones to remain untouched, so he could raise it as a son. That the clone was named Boba Fett. After witnessing the death of his father to Mace Windu on Geonosis, Boba grows up to become a bounty hunter, just like his father was. He aids Darth Vader in the capture of Han Solo, and transports the carbon-frozen Solo to Jabba's Palace, where he gets his reward. He seems to meet his end at the sand dunes of Tatooine. In the game, Boba carries a gun very similar to the Elite Rifle, as well as a Flamethrower. With the addition of Detpacks, Boba Fett is a force to be reckoned with. 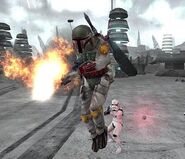 Boba Fett in flight on Yavin 4. 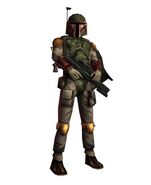 Retrieved from "https://battlefront.fandom.com/wiki/Boba_Fett/Original?oldid=102949"
Community content is available under CC-BY-SA unless otherwise noted.