Bossk is a Galactic Empire Hero in DICE's Star Wars Battlefront. He was added to the game via the Death Star expansion pack, alongside Chewbacca.

Bossk is best used at long range. His Relby packs a big punch and takes a long time to overheat, so don't be afraid to blast away at enemies. It is also important to note that the micro grenades are extremely good at taking out squad shields, and large groups of enemies. His toxic escape ability is great for putting space between you and an enemy which managed to get close to you. His predatory instincts should generally be left on, as they give heat vision, decreased cooldowns, increased damage, and faster sprint speed. Whether the fight is in a cramped tunnel or an open battlefield, Bossk is best used to give heavy fire from a distance. Bossk is also a great counter to enemy snipers because of his heat vision and long-range weapon. Combining his Toxic Escape ability with a well timed jump can allow Bossk to gain extra height. Against other heroes Bossk is devastating. At long range his Relby is able to shred through heroes. And up close he can use his Toxic Escape and Micro-Grenades to easily kill them.

Upon usage, Bossk switches his Relby to grenade mode which fires one grenade per shot at enemy forces. If a grenade hits an enemy soldier, it will kill them upon impact. If not they will explode after a short time. The grenades can bounce off of walls allowing Bossk to effectively fire grenades around corners.

Bossk uses a Predator-style heat detection that detects enemies, friendlies, and himself in all weather including in smoke. Bossk will also gain enhanced melee strength, increased blaster damage, increased sprint speed, and faster ability cooldowns. This will allow Bossk to two-shot enemies, or one-shot headshot them with his primary blaster. Predatory Instincts can be toggled on and off and has no cooldown. It can be countered with a flash grenade or sonic implode which will blind him for much longer than without Predatory Instincts.

Bossk drops a Dioxis Grenade, and then launches in whatever direction the player steers him. Unlike regular dioxis grenades, this one is much more powerful, and can take a lot of health away at a quick pace. He will also regain health per each soldier that dies.

"Bossk is a hunter, able to go on the offensive to root out his prey with deadly Dioxis Gas or keep his distance and snipe from afar, protecting his position with mines."
— In-game description

Bossk returns in DICE's Star Wars Battlefront II as a hero for the Separatists and Galactic Empire.

Bossk is one of the most versatile and sustainable heroes on the battlefront. He is the only hero whose max health regen is the same as his base health, which allows him to regenerate his health back to full when not taking damage. However, the regen delay is slightly longer than most heroes and he regenerates health at a slower rate.

His abilities and weapon can complement both long and close range combat. His Relby V-10 has different characteristics, depending on if the player uses the weapon's scope. When fired from the hip, the weapon deals more damage up close, but will lose damage quickly over range. This can be remedied by zooming in with the weapon, which will charge the current shot. The shot increases in damage the longer the player is scoped in. His abilities can be used to both hold an objective or help push off opponents in a contested area.

His Dioxis Grenade is both an offensive and defensive tool; in addition to healing Bossk with a star card, its effect can go through solid objects, making it ideal for dealing damage to enemies in cover. His Predator Instincts turns him into a hunter. It turns his Relby V-10 into a explosive grenade launcher and gives Bossk thermal vision which will highlight enemies, and faster sprint speed. Finally, his Proximity Mines can deal heavy damage to enemies in a large area when triggered, and can be used to cover his flank, trap enemies, or lock down a contested point.

"Firing too early when using the scope of Bossk’s Relby V-10 will result in dealing less damage with the shot."
— First hint
"If Bossk equips the Name Your Poison Star Card, he will regenerate health while standing within the effects of his Dioxis Grenade."
— Second hint
"Bossk is strong at holding an area or objective location, using his Mines and Dioxis Grenade to keep enemies at bay"
— Third hint

"I will collect the price on your head."
— First emote

"This will be fun."
— Second emote

"You're just another target."
— Third emote

"Nobody can hide from me! *growls*"
— Fourth emote

"What kills you, nourishes me!"
— Upon using Dioxis Grenade

"I have captured so many of your kind!"
— Near Chewbacca

"Did you know a woman named Ventress?"
— Near Darth Vader

Promotional image for Star Wars Battlefront of Bossk on the Death Star. 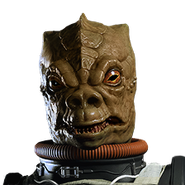