Assault class in DICE's Star Wars Battlefront II. It is earned by eliminating 200 enemies with the Assault class.

The CR-2 is a fully automatic blaster with a very fast rate of fire compared to most other weapons for the Assault class, making it effective at close-to-medium range. It has the fastest rate of fire of any blaster. However, the CR-2 suffers from very rapid damage fall off, causing it to quickly lose its effectiveness at longer ranges.

Overall, the CR-2 is well-suited for close-range shootouts and indoor fighting but becomes much weaker in outdoor areas. Compared to the default blasters available to the Assault class, the CR-2 is less versatile and much more situational, sacrificing long range accuracy for greater close range power. The CR-2 is ideal for close-quarter style maps, such as Death Star II, Yavin 4, and the later stages of Starkiller Base. 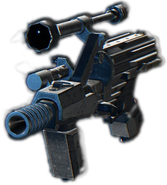 Render with no modifications

Render with all three modifications