"Specializing in hand-to-hand combat and cunning use of gadgetry, the Caphex Spy operates fearlessly behind enemy lines."
— In-game Description

The Caphex Spy is a capable and deadly reinforcement.

The Scanner Beacon is a two-in-one ability. It draws nearby enemies to it, and if the Spy is outdoors, he can call in an orbital strike to defeat clusters of naïve opponents. Utilizing the Desperation Star Card allows him to use the strike more often.

The Truncheon Attack works like Captain Phasma’s Staff Strikes, in which the third hit, should it register, knocks the opponent into the ground.

If the Spy is surrounded by numbers of opponents and can’t activate his orbital strike, it may be time to overload his GLIE-44 to fire rapidly, dealing high damage to opponents.

Close-up, note the Ovission Gunner in the backround 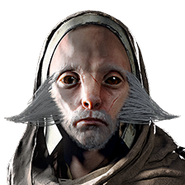 In-game icon for the Caphex Spy.
Add a photo to this gallery

Retrieved from "https://battlefront.fandom.com/wiki/Caphex_Spy?oldid=89288"
Community content is available under CC-BY-SA unless otherwise noted.