"A commanding officer of the First Order, Captain Phasma uses every tool possible to ensure her survival. Her staff strikes allows her to deal with attackers who are foolish enough to come close."
— In-game description

Captain Phasma is a First Order Hero in DICE's Star Wars Battlefront II. She arrived on Tuesday, December 4, 2017, as part of the 1.0 Patch and The Last Jedi Season.

Phasma comes into battle with the ability to lay down a First Order Sentry Droid. Enemy players who are unfortunate enough to fall within the stationary Sentry Droid's radius are stunned and shot at by the droid. Phasma's Sentry Droid is particularly useful in area denial, especially on objectives that must be defended or otherwise strategic areas to prevent the enemy from moving across that area on the map. The droid itself is still just as vulnerable to ion weaponry as other shields and turrets, and the resulting explosion from its destruction can damage Phasma or any of her allies near it.

Phasma can swing her staff three times consecutively; although her staff strikes make her vulnerable, they can be used in combination with shocked enemies in the radius of her Sentry Droid, knocking them down while they are stunned and dealing extra damage with each hit.

Phasma also comes with an ability that gives her bonus health. This is best used whenever Phasma needs to heal herself after taking damage, but it can also be used for pushing objectives and other areas of interest.

"My troops will storm in and kill you all."
— Second emote

"The First Order will conquer you all."
— Fourth emote

"To me, the enemies of the First Order will fall today."
— Using Survivor

"I will not be defeated."
— Using Survivor

"Fall behind me, or get out of the way!"
— Using Survivor

"On my command."
— Upon spawning

"From now on, you report to me."
— Upon spawning

"My troops are ready."
— Upon spawning

"Prepare for full assault."
— Upon spawning

"The First Order is supreme."
— Upon spawning

"You make it hard to miss."
— When outnumbered

"Finn: You remember me?
Phasma: Whatever you call yourself, you're FN-2187."
— Banter with Finn

"Phasma: Kylo Ren wants you captured. I don't much care.
Rey: Kylo Ren is a monster and so are you!"
— Banter with Rey

"Phasma: You've been particularly troublesome.
Rey: Then you shouldn't have started trouble!"
— Banter with Rey

"Kylo Ren: Your troops should've handled this.
Phasma: Easier to fight, than to acknowledge defeat."
— Banter with Kylo Ren

"Phasma: My troops are dying.
Kylo Ren: What else are they for?"
— Banter with Kylo Ren

Phasma on Starkiller Base 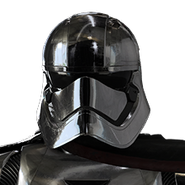