A Clone Commander of the 212th battalion, Commander Cody served under Obi-Wan Kenobi almost exclusively throughout the Clone Wars. Cody's battalion was heavily involved in the attack on Utapau to capture General Grievous. Working as the marshall Commander, he was second to command after General Obi-Wan Kenobi. Cody eventually turned on Obi-Wan without hesitation when Order 66 was given.

Parts of Cody's body including his helmet or orange coloured armour can be used to customise Clone Troopers in Star Wars: Battlefront: Renegade Squadron and Elite Squadron. 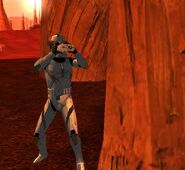 Cody in the "Landing at Point Rain" mod map
Add a photo to this gallery
Retrieved from "https://battlefront.fandom.com/wiki/Clone_Commander_Cody?oldid=86740"
Community content is available under CC-BY-SA unless otherwise noted.