The Clone Engineer (or Clone Pilot in Star Wars Battlefront I) is the technician and medical unit for the Galactic Republic. The Clone Engineer is a necessity on the battlefield, valuable in tight, enclosed battle conditions as vehicle-heavy warfare. This unit is equivalent to the Engineer Droid, Rebel Smuggler, and the Imperial Engineer.

The Clone Engineer carries a DP-23 Shotgun, useful in tight spaces. The weapon does lethal damage at close range, able to dispose of most units in a single, well placed shot. However, with lack of a secondary weapon, he is somewhat useless at longer ranges. In place of a secondary, he carries an F-187 Fusion Cutter, able to repair vehicles, Health and Ammo Droids, and turrets, and, in addition, slice into vehicles, removing any enemies that may be occupying it. He is equipped with DP-1 Detpacks, high-damage, remote-detonated explosive devices. With these, he is able to make quick work of enemy vehicles, as well as set effective traps. His second item is a Health and Ammo Dispenser, allowing him to supply and heal his nearby squad mates, or himself, by tossing out a Health/Ammo pick-up.

A Clone Engineer trying to destroy the droideka.

A Clone Engineer with his gun.

A Clone Engineer on Rhen Var. 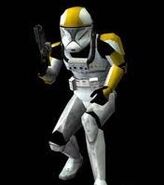 A Clone Engineer from Star Wars Battlefront 1.
Add a photo to this gallery

Retrieved from "https://battlefront.fandom.com/wiki/Clone_Engineer?oldid=89452"
Community content is available under CC-BY-SA unless otherwise noted.