Clone Officers have a wide selection of Appearances to choose from, all of which can be purchased with Credits.

An early in-engine render of a non-clone Republic Officer. 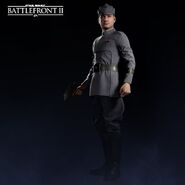 Promotional material of a Republic Officer.
Community content is available under CC-BY-SA unless otherwise noted.
Advertisement