Edit
watch 02:23
Wiki Targeted (Games)
Do you like this video?
Play Sound

This is an article for the Pilot Class for the Galactic Republic in Battlefront 2, if you are looking for Clone Pilot that appears in Battlefront 1, please look at the Clone Engineer page.

The Clone Pilot is the pilot class unit for the Galactic Republic. They are more suited for flying ships, as they are able to heal the ship in flight. They also have the addition of time bombs, meaning you will easily be able to take out the enemy ship's critical points from the inside, as well as heal you own from within. Clone pilots are also engineers who repair ships on the go and fly at the same time it takes extreme training to be a clone pilot and succeed in staying alive. They are the most common units seen in the space combat modes. (Equivalent- Rebel Pilot, Droid Pilot, Imperial Pilot)

The variant with an open helmet, from all Battlefront II maps

The variant with an enclosed helmet (not used) 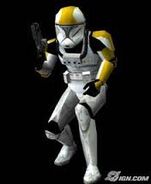