The Clone Sharpshooter is the sniper unit for the Galactic Republic. Used to pick off enemies from long-range, their gun has increased zoom, allowing for accurate shots at longer ranges. Generally you will have to aim slightly ahead of the enemy unit to make sure you hit it. You have to always aim for the head, otherwise, you may not be able to kill him which allows him to see the tracer that your shots leave behind which will give away your position to the enemy and he can easily evade you or find cover, preventing you from killing/destroying him. In Star Wars: Battlefront II, the Clone Sharpshooter and his fellow sniper classes will not be able to use the targeting reticule if not zoomed in-- but this is no hindrance to experienced players, who often become quite good at 'hipfiring'. An effective combo is to fire the rifle at a unit to knock down his health to a critical level, then switch to the pistol and fire rapidly to finish him of. It can be challenging to get a head shot on any unit other than the Super Battle Droid, as the heads of most other droids are quite thin. An easy way to do it is to get up close to one, though this also puts your life at risk, given the Clone Sharpshooter's below-average health.

The best planets to use him are: Geonosis, because there are few hiding places and the map is very open, Mos Eisley, as there are lots of hiding places and elevated positions perfect for snipers but there is also a lot of cover for your enemies to use, Kamino, as there are lots of elevated and lower platforms and many turrets that display only the head, and Kashyyyk, as there is a whole elevated module and, like Geonosis, the map is very open.

Unlike a traditional army, where snipers are picked from the best shooters, the clone troopers all possess the same characteristics regarding eyesight, accuracy, steadiness, and patience. However, the clone sharpshooters have received special “flash training,” teaching them the intricacies of being a good sniper. They have also trained exclusively with the modified DC-15x Sniper Rifle. On the battlefield, the Clone Sharpshooter is primarily responsible for one task: disrupting enemy activity by picking off crucial infantry. His specialized conditioning provides him with the ability to gather intelligence, sit, wait, and methodically pick off enemy units one by one.

The scout trooper variant, from Felucia, Kashyyyk and Mustafar CTF.
Add a photo to this gallery

A Clone Sharpshooter on Felucia.

A Clone Sharpshooter on Geonosis. 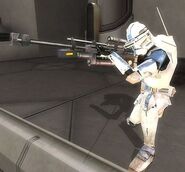 A front view of the corrected Clone Sniper.

A wire mesh of the helmet.

A fall of clone sharpshoter

Scouts and Commander Gree.
Add a photo to this gallery

Retrieved from "https://battlefront.fandom.com/wiki/Clone_Sharpshooter?oldid=86752"
Community content is available under CC-BY-SA unless otherwise noted.