Clone Troopers are the main infantry force of the Grand Army of the Republic, and the elite 501st Legion.

Clone Troopers are armed with the powerful and accurate but short ranged DC-15 Blaster Rifle to destroy the enemies of the Republic.

In previous campaigns on Geonosis and planets like Bespin they were equipped with Phase I Clone Armor but have more recently upgraded to the Phase II Armor.

The elite Clone Troopers made up the majority of the Galactic Republic's Military and served on many different planets. The Clone Trooper is the equivalent to the slower but more heavily armored Super Battle Droid, as well as the Rebel Soldier. Their successors are the Stormtroopers.

A Clone Trooper about to be slain by a Jedi Padawan.

Some Clones on Geonosis.

A Clone Trooper on Kamino. 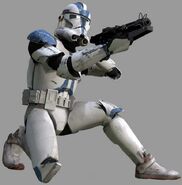 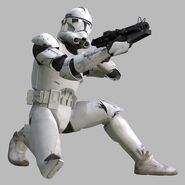 A Clone Trooper kneeling down to fire. 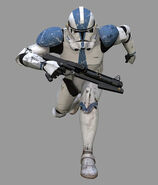 A Clone running into battle. 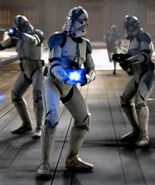 A Clone Trooper capturing a Command Post on Kamino.
Add a photo to this gallery

Retrieved from "https://battlefront.fandom.com/wiki/Clone_Trooper/Original?oldid=101995"
Community content is available under CC-BY-SA unless otherwise noted.