"Count Dooku was a Sith Lord and the leader of the Confederacy of Independent Systems. Once trained by Grand Master Yoda, he turned his back on the Jedi Order and devoted himself to the dark side."
— In-game description

Count Dooku, also known as Darth Tyranus, is a Separatist Hero in DICE's Star Wars Battlefront II.[1] He arrived on January 23, 2019, as part of the Darth Tyranus Update[2][3][4] He originally cost 35,000 credits to unlock but this cost was removed in the Capital Supremacy Update.

Count Dooku is a formidable and elegant duelist. He is mainly a close-ranged hero. He can swing and block longer than most other lightsaber wielders, possessing a high amount of stamina. Count Dooku can also dodge more frequently than other heroes, possessing three dodges instead of two. This allows him to avoid more attacks and outmaneuver his opponents more effectively.

His lightsaber attacks can be made even deadlier with his Duelist ability, which will increase the damage of his lightsaber and his swing speed. Combining Duelist with the Initiative, Masterful Duelist, and the Dominance Star Card, along with Expose Weakness, allows Count Dooku to deal very high damage to enemies.

Lightning Stun knocks enemies into the ground, leaving them open to further attacks. It is able to kill three of the four base classes, and low-health Heroes. The damage drops off the more targets it affects.

"Count Dooku is a menacing opponent up close but is not as powerful against enemies far away or in greater numbers."
— First hint
"Count Dooku has a stronger Dodge Ability than most characters. It recharges faster and can be performed more times in consecutive order."
— Second hint
"DUELIST boosts Count Dooku's lightsaber attacks, surprising his enemies with faster and more devastating blows. "
— Third hint

"I’ve been looking forward to this."
— Second emote

"The Sith control everything."
— Fourth emote

"Tell me what you want and I will show you how the dark side can help you achieve it."
— Upon spawning

"Search deeply... you'll find even fear has abandoned you."
— Upon spawning

"I think not!"
— Upon using Lightning Stun

"You dare challenge a Sith?"
— Upon using Lightning Stun

"Your limbs obey my commands now."
— Upon using Expose Weakness

"My master wields it!"
— Upon using Duelist

"Pride has failed you."
— Upon using Duelist

"It is obvious that this contest cannot be decided by our knowledge of the Force... but by our skills with a lightsaber."
— In-game

"Hope is something we cannot allow our enemy to possess."
— In-game

"I did not bring you here to flit about like some Toydarian!"
— In-game

"I would have thought you had learned your lesson."
— In-game

"Ignorance of the Force will not save you from it."
— In-game

"Dooku: Ventress and Savage Oppress failed me. Perhaps you could use a new master.
Anakin: I could use a new wardrobe too, but that doesn't mean I want to go shopping with you!"
— Banter between Count Dooku and Anakin Skywalker

"Dooku: Stop using the standard attacks, use the unorthodox.
Grievous: Yes, my lord."
— Banter between General Grievous and Count Dooku

"Dooku: You are the worthy adversary, Master Kenobi.
Obi-Wan: And you are a traitor."
— Banter between Obi-Wan Kenobi and Count Dooku

"How does it feel to know your training led me to the wisdom of the Sith?"
— Banter with Yoda

"Is that... the Force I sense within you?"
— Banter with Leia Organa

"I sense Master Yoda's hand in this."
— Banter with Luke Skywalker

"Another devotee corrupted by the Jedi's hypocrisy."
— Banter with Rey

"You should have remained on Kashyyyk."
— Banter with Chewbacca

"Descended from your precious trees, have you?"
— Banter with Chewbacca

"I'm hardly frightened by a thug with a gun."
— Banter with Han Solo

"Why do you smell like a Wookiee?"
— Banter with Han Solo

"Such swagger masks a deep insecurity."
— Banter with Lando Calrissian (only when the Raconteur or Professional "Sportsman" skin is equipped) 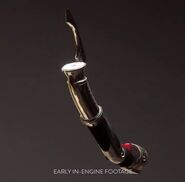 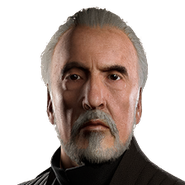