Count Dooku is the Confederacy of Independent Systems' NPC Hero in Star Wars: Battlefront. Dooku is playable as a hero in Star Wars: Battlefront II, voiced by Corey Burton. Dooku is a Sith, the second apprentice of The Emperor, and is very skilled in the ways of the force. His lightsaber is very unique in the shape of the hilt, and allows him to gracefully and effectively combat his opponent. He is eventually killed by Anakin Skywalker, before Anakin turned to the dark side. However, if Galactic Conquest mode is won by the CIS, Dooku kills Anakin. Dooku slashes horizontally and covers a big distance in his lightsaber combo. Another great combo used by Dooku players is choke lightning, also known as "Chokning". If you force choke an enemy and then switch to lightning, the enemy gets choked and gets electrocuted simultaneously. 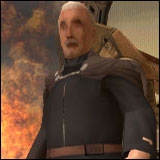 Count Dooku.
Add a photo to this gallery

Retrieved from "https://battlefront.fandom.com/wiki/Count_Dooku/Original?oldid=80044"
Community content is available under CC-BY-SA unless otherwise noted.