The DC-15x is the Galactic Republic's Sniper Rifle. It is the predecessor to the E-11s Sniper Rifle of the Galactic Empire. It was designed to bring hard-hitting rounds at the Droids, and was equipped to the Clone Sharpshooters. The Galactic Empire decided to do away with this weapon because it was old technology. This weapon can zoom in to a x10 factor; however, it is a difficult weapon to use, due to its low ammo capacity. Being a sniper rifle, it is poor for close-range encounters. People who choose to be Snipers must be protected by the Soldier (class). 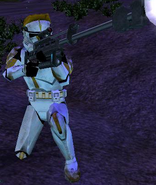 A Clone Sniper with the ROTS style Sniper Rifle.

Another custom 3D model of the DC-15x by giftheck. The same design is used in the official game Star Wars: Galaxy of Heroes

Retrieved from "https://battlefront.fandom.com/wiki/DC-15x_Sniper_Rifle?oldid=100006"
Community content is available under CC-BY-SA unless otherwise noted.