Dagobah is a forgotten world in the Outer Rim which has swamps and dark areas. Travelers are known to get lost here quite easily. Dagobah is home to Yoda after the Clone Wars. The map features Yoda's hut, Luke's wrecked X-wing (GCW only), a crashed Republic Gunship (CW only) and the cave of evil where Luke battles with the Dark Spirit taking the form of Darth Vader. There is a tall tree you can climb which is perfect if you are the sniper class.

Dagobah is the marshy, undeveloped swamp planet that Luke Skywalker crashes down on in Star Wars Episode V: The Empire Strikes Back. It is the last residence of the Jedi Master Yoda, and it is the place where Luke receives his formal Jedi training.

Dagobah has no involvement in the story mode, as Yoda was the only one hiding at the planet.

The terrain and plant life renders far distances invisible along with the aid of fog, making it hard to see opponents that may be very close to you before it is too late. There are many choke points where combat is unavoidable. AIs are rather unfair and have an advantage that they can see you, even through the thickest fog. Another hindrance of a human player is that some factions like the Rebel Alliance and the Galactic Republic utilize camouflage armor, making them hard to spot. The map is highly bias to the faction with the starting command post on the top of the map. The map also has an eerie background with the sounds of Dagobah birds and beasts. A common and annoying glitch in mod-addition of the map included a lot of dark patches on the armor, weapon, and the environment. 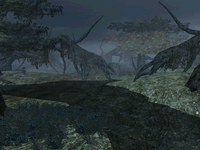 Retrieved from "https://battlefront.fandom.com/wiki/Dagobah:_Swamp?oldid=89491"
Community content is available under CC-BY-SA unless otherwise noted.