Dark Troopers are a special infantry unit available exclusively to the Empire. The loadout of a Dark Trooper in Battlefront I gives them access to a Blast Cannon as their primary weapon, a Blaster Pistol as their secondary weapon, or "sidearm", and Thermal Detonators for use as anti-infantry and anti-vehicle explosives. Dark Troopers, as a result of their loadout, play with a close-range combat style, as their pistol is more effective at long ranges than their blast cannon. In Battlefront II, Dark Troopers have a slightly different loadout: Their blast cannon has been replaced with the ARC Caster, a gun that fires electric bolts as a weapon. Their Blaster Pistol has been exchanged for a Commando Pistol as their preferred sidearm, and they still carry Thermal Detonators as well.

The Dark Trooper is unique for its Jumpack, a special piece of equipment used by these units to propel themselves high into the air and fly far distances with a short, powerful burst from the pack. This item allows Dark Troopers to perform a "jump in, fight, jump back out" strategy that can help them to recuperate after a fight with Rebel troops. Dark Troopers are a unit that adds to the diverse set of tactics that the Galactic Empire can use in battle with Rebel soldiers.

Like the Imperial Officer the Dark Trooper does not change his skin on any map.

Dark Trooper on top of an AT-AT. 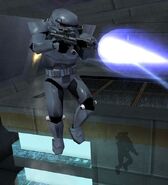 A Dark Trooper on Hoth.

A Darktrooper in Star Wars Battlefront.

A Dark Trooper on the Death Star.

A Dark Trooper flying on Tatooine.
Add a photo to this gallery

Retrieved from "https://battlefront.fandom.com/wiki/Dark_Trooper?oldid=93978"
Community content is available under CC-BY-SA unless otherwise noted.