"Darth Maul uses his expert lightsaber skills and aggressive Force powers to quickly assault and overrun the enemy, one at a time."
— In-game description

Darth Maul is a Dark Side Hero for the Separatists and Galactic Empire in DICE's Star Wars Battlefront II. His personal starship, the Scimitar, can be played in Starfighter Assault and Hero Starfighters.

A combination of fast slashes, dangerous abilities and incredible speed make Darth Maul the ultimate aggressive attacker. Players are advised to strike quickly and remain on the move, when picking this Sith Apprentice. On April 24, 2019, the Giants Above Kachirho Update saw Maul finally receive a block against lightsabers and blaster fire.

Maul's first ability, Furious Throw, sees him hurl his lightsaber straight ahead of him, damaging all enemies it touches before it returns to his hand. Prior to the June 11th Patch, Maul threw his lightsaber vertically as opposed to the horizontal method he employs now. Maul's Furious Throw gives him a ranged attack that he can use to take out troublesome enemies form afar. Due to the precision it requires to be effective though, this ability should be reserved for times when Darth Maul is only facing one or a few enemy units. If he misses, he will have to wait for the ability to recharge before he can use it again. He is also defenseless when his lightsaber is in the air.

With his second ability, Choke Hold, Maul chokes a few enemies at close range before sending them flying to the ground. This ability is limited to his immediate line of sight and its range is also limited, so it is advised that players position themselves wisely before using it. Maul will also be momentarily defenseless and unmoving when using this ability. However, if enemies lie within the range of this ability, its affect can be devastating. It is usually non-lethal on enemies with full health, but surviving units can be mowed down quickly with a Spin Attack or a Furious Throw. There is no limit to the number of enemies Darth Maul can choke, so it is possible to rack up a large number of Battle Points by using this ability in the right position.

His third ability sees him enter into a high velocity lightsaber Spin Attack, cutting down enemies in his path as he leaps forward. This ability can be used in rapid succession at least two times before going into cooldown. Not only can Darth Maul use his Spin Attack to launch himself at an enemy, but it can also be used to make a hasty retreat if under fire. Although the Spin Attack deals quite a bit of damage, it does not often kill enemy units and additional attacks may be required. That said, the Spin Attack can be very effective against a large cluster of enemies, as it can deal damage to all of them simultaneously, leaving them vulnerable to a few quick strikes from Darth Maul's lightsaber. The Spin Attack will also deflect incoming laser bolts when used.

Spin Attack has a high chance of not hitting enemies that should've been affected. It seems to get worse if Maul uses spin attack in a place where it forces him to go upwards (like a slope, a ramp, or a stair), or if he should hit multiple enemies with it. This bug was introduced in 2019.

If you keep holding the Block Button during the performance of Spin Attack, it might bug your block in a way that if you use it, Maul will play the blocking animation properly, but if someone attacks him during this, his block won't work, allowing all hits to pass through even though visually Maul is with his block up, and the player is pressing the block button accordingly. Releasing the Block Button and activating it again fixes the issue.

"Darth Maul’s Furious Throw deals damage to enemies on its return."
— First hint
"Darth Maul’s Choke Hold can be used to throw enemies from ledges."
— Second hint
"Maul is most effective when on the move, hitting his enemies and keeping mobile"
— Third hint

"At last I will have my revenge."
— First Emote

"I sense your fear."
— Second Emote

"The Sith are all-powerful!"
— Third Emote

"You are no match for me."
— Fourth Emote

"You are helpless."
— Upon using Choke Hold

"Choke in my grasp!"
— Upon using Choke Hold

"Such a waste."
— Upon using Furious Throw

"The Grand Master... At last!"
— Upon spotting Yoda

"A girl... possessed with great power."
— Upon spotting Rey

"A JEDI!"
— Upon spotting Luke Skywalker

Darth Maul in Theed, on Naboo. 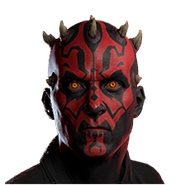