"Darth Maul's personal ship is equipped with an experimental stealth drive, making it a capable ambusher that is deadly to even the best pilots. "
— In-game description

The Scimitar is a Dark Side Villain ship for the Separatists in DICE's Star Wars Battlefront II. It is the personal Sith Infiltrator of Darth Maul.

The Scimitar is a Dark Side Villain ship flown by the Sith Lord Darth Maul. Its primary weapon has a very fast rate of fire and is able to deal a good amount of damage to enemy ships but with the cost of overheating quickly. The Scimitar's abilities can allow for the ship to be very effective at ambushing enemies, particularly its Stealth Drive, where with the right Star Cards and laser placement, it can cut down even the most durable ships within seconds. The Scimitar is playable in Starfighter Assault for 2,000 Battle Points and in Hero Starfighters for free.

"The Scimitar is taking damage."
— When receiving damage 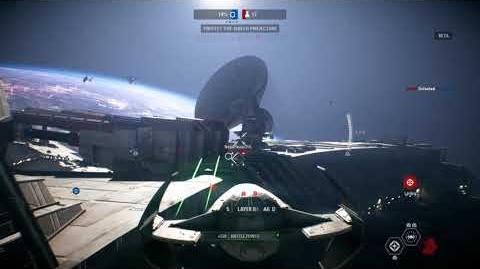 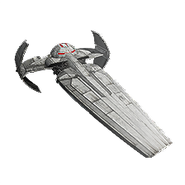 In-game icon for the Scimitar.