Darth Maul is the Emperor's apprentice from Episode I: The Phantom Menace. A red Zabrak with Sith tattoos, Maul is very unique in appearance and combat style and has mastered the art of combat with the Doublesaber. This allows him to fend off more opponents, but increases the risk of cutting himself. Much about Maul remains a mystery, but he was eventually defeated, shortly after killing Qui Gon Jinn, at the hand of Jinn's apprentice Obi-Wan Kenobi. He returned during the middle of the Clone Wars, but he was betrayed by his old master Darth Sidious. A very formidable adversary, Darth Maul is a killing machine in the game, and any non-hero in his path is sure to meet a quick death. His lightsaber attack even includes a special twist: if you tap attack several times and then hold it, another move is added to the end of his normal sequence. 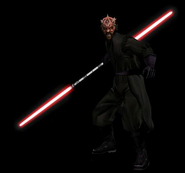 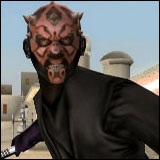 Retrieved from "https://battlefront.fandom.com/wiki/Darth_Maul/Original?oldid=84201"
Community content is available under CC-BY-SA unless otherwise noted.