"Your destiny lies with me."
— Darth Vader in Battlefront II

Lord of the Sith

"You will know the power of the Dark Side."
— Intro Dialogue

Darth Vader is a Galactic Empire Hero in DICE's Star Wars Battlefront. He acts as the Empire's lightsaber-wielder, serving as the equivalent to the Rebel Alliance's Luke Skywalker.

Darth Vader is a menacing presence to behold on the battlefield, the sound of his breathing apparatus combined with his lightsaber cutting down foes is enough to strike fear into any insurgent. Vader is a powerful, close quarters villain but can have trouble closing distances purely based on agility. His Flight plays an important role in closing the gaps between enemies. In close range, Vader's abilities are very destructive to his foes. However, he is much slower than other heroes.

Vader is considered to be a tank and is very resilient to damage. With his Lord of the Sith trait, which boosts up his defense, he has the capability to wipe out an entire rebel base without losing much health. Vader can take down strong heroes like Chewbacca while taking damage from other enemies. His Trait actually increases when hitting heroes and getting damaged. Vader has the capability to defeat Chewbacca with at least 40% health left.

Darth Vader's hero trait is called Lord of the Sith. Darth Vader's armor increases based on the number of enemies surrounding him. This only affects to blaster bolts and explosions and doesn't affect to melee attacks (lightsaber included) or force abilties. Heroes count as two enemies towards his trait progression. Armor is a bonus amount of health added to a player's health bar that not only grants the player an increased amount of health but a greater amount of damage resistance as well. Darth Vader's trait, like the other heroes in Star Wars Battlefront, has three levels, each more powerful than the previous. The bonuses given to Darth Vader for each level of his hero trait are defined below:

A close up shot of Darth Vader's fear invoking helmet and mask.

A front and back view of Darth Vader's suit.

Darth Vader in an intense lightsaber battle with his son, Luke Skywalker.

There was a limited edition Darth Vader PlayStation 4 released alongside Star Wars Battlefront (2015).

Cinematic capture of Darth Vader on Survivors of Endor

"Darth Vader's high survivability and powerful Force powers enable him to stand on the frontlines and slowly advance on his enemies."
— In-game description

Darth Vader is a tank. His lightsaber deals a considerable amount of damage, and he can sustain himself and his melee attacks and defenses even longer using his Focused Rage, giving himself bonus health, in addition to the massive health pool he already possesses, and slowing his stamina drain for a period of time. However, he plays similarly to other slow characters in the game, and his killer running speed and sprint attack have been removed.

While Vader is slow moving, unlike in the original Battlefront 2, he is not limited to his short range, and can launch his lightsaber forward at enemies using his Saber Throw. This ability is able to damage enemies twice, once when passing through them and a second time on the way back. Certain star cards buff the damage of the throw when passing through the same enemy twice, allowing for terrifying combos.

Vader's second ability is Focused Rage. Activating this ability causes Vader to pull on the force to enhance his own rage. This allows him to deal more damage against his target while also allowing him to take more damage in return. This proves especially helpful in one on one situations against an enemy hero. It allows him to deal with other heroes' large health pools.

Finally, Vader can use his iconic Force choke power to choke entire groups of enemies at once, lifting multiple enemies into the air and dealing damage over time. If an enemy is able to survive the initial suffocation, Vader can finish them off with his Saber Throw or basic melee attack.

"Darth Vader’s Focused Rage increases the damage you deal as well as removing the Stamina cost of his lightsaber strikes."
— First hint
"You can drag and drop enemies off ledges using Darth Vader’s Choke ability."
— Second hint
"Darth Vader’s high survivability allows him to hold his ground against many attackers."
— Third hint

"You are as clumsy as you are stupid."
— Second emote

"I find your lack of faith disturbing."
— Third emote

"This will be a day long remembered."
— Upon spawning

"We would be honored if you would join us."
— Upon spawning

"I'm not so easily injured!"
— Upon using Focused Rage

"Your hope has blinded you."
— Upon using Force Choke

"No escape!"
— Upon using Lightsaber Throw

"These are the fruits of treason."
— In combat

"The price of insurgence."
— In combat

"Vader: You could not stop my master and you cannot stop me.
Yoda: Bold claims from an apprentice."
— Banter between Yoda and Darth Vader

"Palpatine: Do not fail me, Lord Vader.
Vader: The battle will be ours, my master."
— Banter between Emperor Palpatine and Darth Vader

"Luke: Anakin is still a part of you.
Vader: Anakin Skywalker no longer exists."
— Banter between Luke Skywalker and Darth Vader

"Vader: You can be replaced, bounty hunter.
Boba Fett: Not without cost."
— Banter between Boba Fett and Darth Vader

"Vader: Demonstrate your worth, bounty hunter.
Bossk: I have nothing to prove to you!"
— Banter between Bossk and Darth Vader

"The girl, she carries a familiar lightsaber..."
— Banter with Rey

"Princess Leia is here. She is mine."
— Banter with Leia Organa

"Boba Fett, do not disappoint me."
— Banter with Boba Fett

"Calrissian must be punished."
— Banter with Lando Calrissian

"All hail the Dark Lord of killstreaks."
— Heroes vs. Villains announcer when Darth Vader player gets a 5-player killstreak

Cinematic capture of Darth Vader among stormtroopers in an imperial hangar 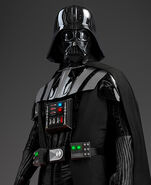 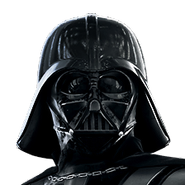